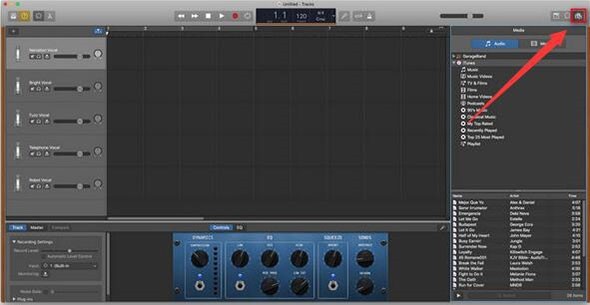 Garageband is a go-to destination for anyone that’s willing to create some music or just play around with instrumental effects. Garageband comes with a package of everything you’ll need to create the best music possible. You can create multiple tracks on your Mac or any other iOS device with the help of the premade loops, pre-made MIDI keyboards, and a ton of wonderful instrumental effects. So, if you are willing to get started on this great app, here’s how to get songs from Apple Music to Garageband.

If you’ve decided on making a remix of a particular song or something like that, the first step is to get the song into Garageband for you to work on it. When it comes to songs, what better way to listen than Apple Music? If you’ve heard a song on Apple Music and would like to make some edits with it, importing it to Garageband is the first step. Make use of the below steps to easily and effortlessly import songs from Apple Music to edit on Garageband.

Steps to Save Apple Music Songs in the Form of MP3

A few things you’ll need are a computer or a laptop running with MacOS, a converter for Apple Music, and of course the Apple Music app, also make sure that the app is on its latest version.

Steps to Add the Converted music into Garageband

If you have performed the above steps as is, you’ll have your Apple Music on the Mac or any other device you’re using. Now, it’s time to add that converted music into Garageband. You’re just minutes away from starting to edit on your favorite song.

First, let’s look into how you can add the songs to Garageband on your Mac:

On your Mac, first, open the Garageband app and search for the button that looks something like this

, and click on it. You can find the button in the top-right corner. All of the music files that you’ve converted earlier will appear after clicking on them. Make your pick and choose the file you want to work on and get started.

Let’s move on to method for iPhone or Ipad:

Before getting started, you need to have the converted music files on your phone, so start by adding them to your iTunes library. To add to the library, start by clicking on MENU, FILE, and then click ADD TO LIBRARY. After doing this, you’ll be able to access the converted files on your iPhone or iPad.

Garageband is a great app for beginners and absolutely user-friendly, working on it is the easiest thing ever. We hope that you were able to get Apple Music songs into Garageband after following the above steps. Now that you have them on the app, start editing and creating music that you can be proud of.

Hello Readers! My name is Andy Cage, and I am the founder of Garagebandonpc.org. I have completed my master's in music from Berklee College of music, Boston, and providing all music-related services professionally. I have been using Garageband Software for the last 7 years for all professional editing, so I thought to share my experience with music lovers through my blog. I love to discuss new things always about the music.